The first steps on the French Way

St Jean Pied de Port (population 1800) is a delightful bustling Basque village nestled in the foothills of the Pyrenees mountains on the French side and is the starting point for The French Way, the best known Camino walk. This charming walled market town, with its steep narrow cobbled streets, lies on the river Nive, and stands at the base of the Roncevaux pass across the Pyrenees.

The name ‘Pied-de-Port’ means ‘foot pass’ or ‘Saint John at the foot of the mountain pass’. This ‘pilgrimage’ is the most popular of the routes of the Way of St. James and extends 790 km across Northern Spain, traditionally starting at the 14th century church in the town centre of St Jean Pied de Port.

To get there, you have a few options but the main choices from Australia are to fly into either Paris or Barcelona.

If you fly into Paris, you can catch the high-speed TVG train to St Jean Pied de Port either from Charles de Gaulle airport or alternatively from Montparnasse station in central Paris if you would like a few nights in Paris first. The train goes to Bordeaux where you change trains for Bayonne and then again in Bayonne for the short journey to St Jean Pied de Port. Trains can be booked at Rail Europe.

You can also fly from Charles de Gaulle to Biarritz with Easy Jet and spend the night in coastal Biarritz or travel the short distance from Biarritz to St Jean Pied de Port via bus and train or by private transfer or taxi. If you prefer to transit straight through and avoid staying in Paris, you can do this with Qatar or Etihad airlines straight through to Biarritz via Doha and Paris, with a change of aircraft in Paris to continue with Air France on to Biarritz. This means passengers going on the Camino from St Jean can avoid staying overnight in Paris or booking a low-cost carrier flight from a different airport. It makes it a very easy transition for people who are a bit nervous about going into Paris city and staying overnight.

If you are flying into Barcelona, you can overnight and then catch a train to Pamplona and then a daily local bus or private transfer from Pamplona to St Jean Pied de Port.

Regardless of your choice, before commencing the Camino, we suggest at least a couple of nights to rest and adjust to Europe time in either Paris, Biarritz, Barcelona or indeed an extra night in St Jean Pied de Port itself.

10 THINGS TO DO WHEN YOU ARRIVE

Note: Australians do not need a visa for France or Spain for trips of less than 90 days and there is no passport check as you quietly walk into Spain. There may be intermittent wifi access on this day’s walk but don’t rely on it.

The first day’s walk from St Jean Pied de Port in France is through the Pyrenees mountains that divide France and Spain to Roncesvalles. We receive many questions about this day – mostly about the difficulty, but also about the options.

Napoleon route (the most common route)

The traditional and most common way to walk this day is up over the picturesque Pyrenees mountains following the Napoleon (or Orisson) route, which is featured in the film The Way. This is a beautiful walk, but one of the more challenging days as you are potentially tired/jet lagged and this is your first day on the trail, which involves an ascent of 1250m carrying what you need for the day.

Leaving St Jean Pied de Port, the sealed road switchbacks and climbs fairly steeply out of the valley on a quiet sealed road. Once past the Albergue at Orisson, where you can stop to refuel, the gradient starts to level out somewhat and you follow a grassy trail that climbs and winds through the hills before dropping down steeply into Roncesvalles. 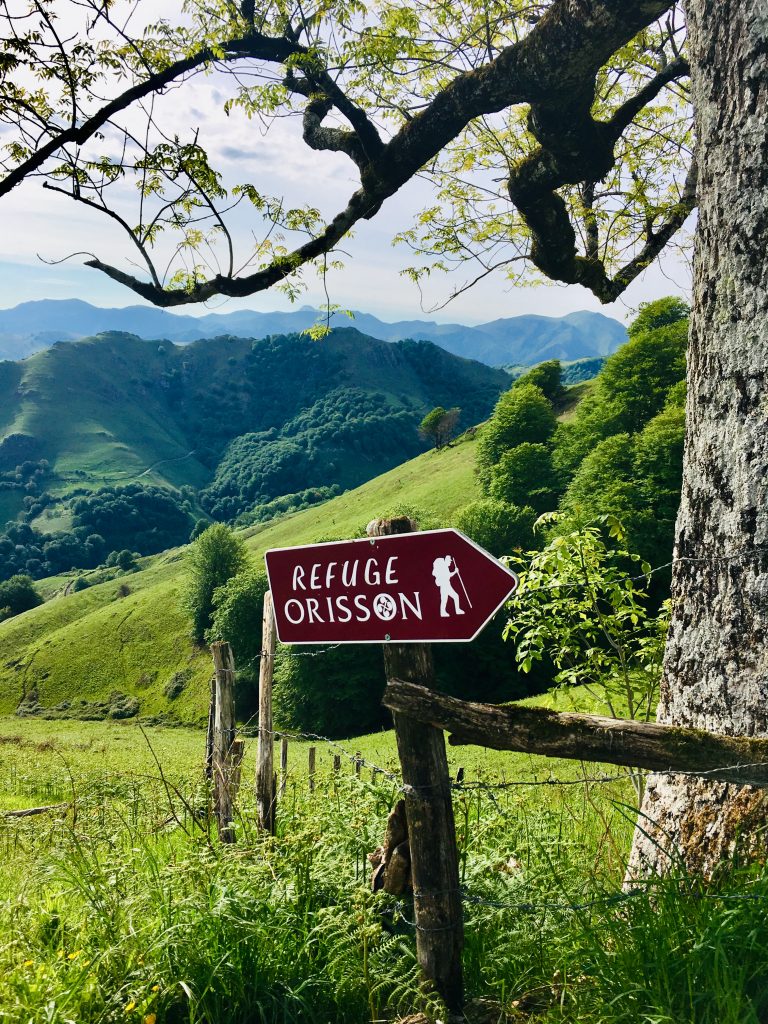 The walk through the Pyrenees can be unpredictable because of the weather; however, people used to walking in hills or trekking will not find it an especially difficult day as the gradients are not that severe and the steepest part of the walk is on a quiet road. This route had strategic importance during the Napoleonic wars and it is the route Napoleon took to cross into Spain following the old Roman road the Via Traiana. It was also used as a route through the Pyrenees by Emperor Charlemagne.

This is the route that pilgrims have used for several centuries primarily because of its lack of trees and other places where bandits could hide, unlike the heavily wooded route through Valcarlos.

The alternate Valcarlos (or road) route to Roncesvalles may need to be taken in the event of bad weather, such as snow or heavy fog. This route stays closer to the road and has a steep 600m ascent at the end of the day up to Roncesvalles. It is not as well marked and you will encounter more road traffic.

Both routes have an ascent and both have the option to break this day over two by either staying at an Albergue at Orisson or a Hotel at Valcarlos. The 18-bed accommodation in Orisson is a basic but very well run and popular Albergue that can be pre-booked for an overnight stay, but it sells out well in advance. The sunrises from here are beautiful!

You can start in St Jean Pied de Port, but you can also omit this day altogether and start your pilgrimage in either Roncesvalles or Pamplona on the Spanish side, which are both popular starting points.

You can also take a shuttle bus up to near Orisson and thereby limit the number of kilometres walked on this first day as well as the steepest section of the Napoleon route. The bus leaves at 8.30 am from central St Jean Pied de Port.

You can also have two nights in St Jean Pied de Port and use one of those days to walk part way (and return to St Jean Pied de Port) and the next day to complete the walk by transferring back to where you walked to the previous day and continuing to Roncesvalles.

Below is a map from the John Brierley guidebook which demonstrates the altitude and routes of both options and a summary of options for your first day’s walk.

If you would like more advice about this day, please contact our Camino Team. They have walked this section and are happy to pass on their expertise. You’ve arrived! Roncesvalles (population <100) in the municipality of Navarre in Northern Spain is the first place that you will come to in Spain and has great historical significance for such a small hamlet. It is situated at the bottom of the Pyrenees pass at an altitude of 900 metres on the river Urrobi and is a very welcome sight for pilgrims after the walk over the mountains.

Roncesvalles is famous in history and legend for the defeat of the French Emperor Charlemagne and the death of his heroic knight Roland here in 778 who was a popular legendary figure in medieval Europe. Today, Camino pilgrims continue to give thanks at the famous monastery for a successful crossing of the Pyrenees, one of the hardest parts of the Camino de Santiago.

If you can stay awake, attend the pilgrims mass at 8pm. Otherwise, check-in, have a shower and enjoy a meal at the social Hotel Roncesvalles, which has wonderful food and wine, and comfortable beds – you deserve it!

Regardless of how you choose to walk the firs days of your Camino, the views, the accomplishment and the camaraderie will reward you long after your last steps in Spain.